In stock
Half demon, half human, and with a visceral obsession for revenge... Step into the shoes of the Stranger and fight bitter battles in the wastelands of Hell. She annihilates demonic...

Half demon, half human, and with a visceral obsession for revenge... Step into the shoes of the Stranger and fight bitter battles in the wastelands of Hell. She annihilates demonic hordes and destroys their leaders until you can face off against the Red Inquisitor herself.

Metal: Hellsinger is a rhythmic FPS where your ability to shoot without missing a beat will enhance your gaming experience. The more you sync up with the music, the more intense it becomes and the more destruction you cause.

Defeat hordes of demons with the help of the skull-blade and a vast arsenal of super-destructive weapons. Each weapon has its own ultimate ability, such as the Crowslayer or The Eternal Goodbye.

Although we refer to it as Hell; In reality, the Plains of Hell is made up of thousands of individual hells each with their own terrifying, devilish twist. In fact, to dethrone the Red Inquisitor, you'll have to fight your way through challenging areas, from the frigid world of Voke to the schizophrenic atmosphere of Stygia.

Metal: Hellsinger is the work of The Outsiders, a team with a lot of experience in developing FPS games. In addition, it is also the project that David Goldfarb, the director of Payday 2 and lead designer of Battlefield 3 and Battlefield: Bad Company 2, had always dreamed of.

Each song on the OST has been created specifically for this game by singers and metal music icons such as Serj Tankian (System of a Down), Matt Heafy (Trivium), Mikael Stanne (Dark Tranquility), Randy Blythe (Lamb of God), Alissa White-Gluz (Arch Enemy) and Tatiana Shmailyuk (Jinjer). 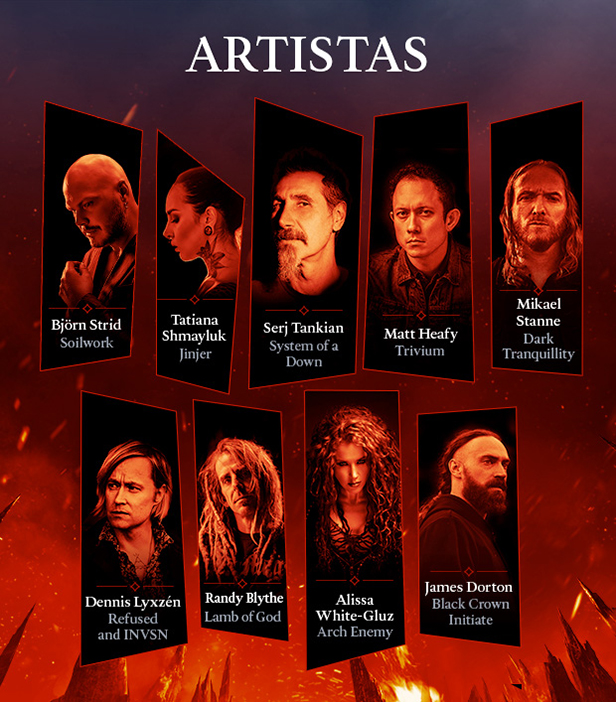 DMCA and copyright information:
We own all rights to the songs as they were written, produced and performed for the game. Content creators, we have done everything in our power to ensure that no sanctions occur.
<transcy>Similar products</transcy>